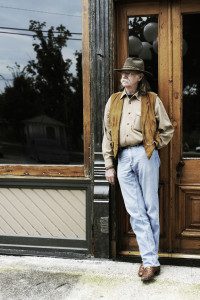 If he asks you, “How’s your conduct?” Tell him, “Stellar.” He stands over six feet tall exuding a frontiersman kind of look.  He speaks with wisdom and pride, loves stories and humor.  And, he’s done well to fortify the American dream and “Made in the USA” traditions that seem to have gotten lost in our worldly world. 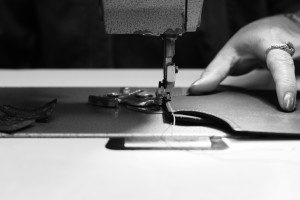 Col.  Garry Littleton, referred to simply as the “Colonel,” is the proprietor of Col.  Littleton, Purveyor of Fine Accouterments in the Americana Tradition.  Starting in an upstairs studio in his house, his fine leather goods and apparel enterprise has grown over the past 25 years and now has forty-plus employees, multiple building space and loyal customers nationwide, including celebrities.  He’s also the largest employer in the small and scenic Southern Tennessee town of Lynnville, population 327, roughly. Upon meeting with the Colonel, we’re standing on the one side of the one block that makes up historic downtown.  This was once a booming railroad town established before the Civil War, and by the early 1900s it had three banks.  But, its later years would see a decline.  The railroad station is now a museum and the heart of Main Street is the Soda Pop Junction, a real, honest-to-goodness soda fountain and diner. Littleton in recent years bought several of the buildings and moved part of his operations into the large spaces he’s been working to restore to new, but look old.  The poplar wood floors shine among high ceilings, exposed brick and reclaimed fixtures; the bank vaults remain, and some new furniture has been built by hand.  Handmade is the fundamental word.

We walk every inch of production space, which includes a rustic building down the road on his Foxfire Farm in addition to downtown.  Working out of a metal warehouse just wouldn’t fit the Col.  Littleton way.  We watch the process, from choosing the hide to stitching to assembling, adding hardware, engraving and finally packaging with a personal note.  The inventory is rich of leather bags, briefcases, portfolios, writing journals, belts, bracelets, various gift items, along with shirts and hats and knives made of bone.  Sewing machines line a wall where sewers stitch with a careful eye.  There is equipment that can cut, smooth and imprint fine lines, and much of the machinery is decades old, they haven’t changed much over the years.  But, it wouldn’t be without the hands of these dedicated craftsmen/women that create what is heirloom quality.  Each one must be done right, actually perfect, or the leather stops there. The leather is carefully 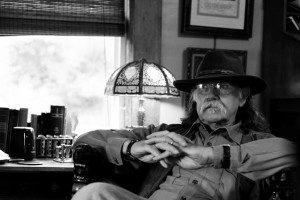 prepared, but not smoothed out so to lose the blemishes – the imperfections are what make it unique.  Items are finished off with hardware like the brass pommel shields reminiscent of those once fixed to U.S.  Calvary saddles or their adjoining saddlebags, which influenced the Col.  Littleton No.  1 Saddlebag Briefcase.  “It’s all about a distinctive look and feel; it’s the finest you can buy in the style we make,” says the designer. New inventions come about now and again.  “We’re like a duck in a new pond around here, always coming up with a new product,” he says.   Dog collars, drink caddies, phone holsters are among them.  His “R&D room” is more like stepping into the attic of an old house where clothes hang on garment racks, artifacts sprawl about tables and desks, old pictures hanging on the walls.  Buttons to knives to you-name-it have been collected for nostalgia and inspiration.  This is where Littleton likes to sit in one of his several “doing business” chairs listening to his Skyrider short-wave radio, pondering ideas and where his staff will often meet to brainstorm. “In everything we do and buy there’s two things that determine cost, whether it’s blue jeans or a car or a camera:  time and material.  That’s all you’re talking about.” The time and material that goes into a Col.  Littleton product warrants a higher cost, but expect it to last.

Littleton awards himself time to play, too, like in his hotrod garage.  A 1927 T-Model Ford Truck and 1951 Willys Army Jeep are among the restored collectibles.  Walls are covered from floor to ceiling with tools, old signs and more relics.  “I just like Americana.  What you see is what you get.”  Col.  Littleton is 100% Americana. From manufacturing to marketing to corporate relations, it’s all done in-house.  “We’re homegrown, we do it all,” says the Colonel.  Employees are loyal and happy.  “Family first, job second,” he says.   “You want people to remember you, when they go to tell somebody about you, they come to you because of your service.  We’ve gotten tons of letters from people saying they can’t believe how well we treat our customers.”  He concludes, “Always do more than what you get paid for.” The American dream is alive and well in Lynnville, TN and the Colonel will proudly tell his tales of what it means to live in this “One Horse Town.” Visit him at www.colonellittleton.com.

Rebecca Bauer is a communications professional, writer and Certified Equine Specialist In Mental Health and Learning from PATH, Int’l.

Anthony Scarlati is a fine art portrait photographer and photojournalist known for his soulful and thought-provoking images. A native of Chicago, he has spent more than twenty years working in the music and travel industries.  Anthony now calls home Leiper’s fork, Tn and more of his work can be seen at www.scarlati.net and his travel blog www.scarlatiblog.wordpress.com