Beneath the high-ceilinged fluorescents of the Hickman County Public Library, I sat down with Clay Harris, Centerville’s community activist and local playwright. 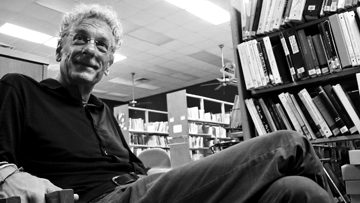 He leaned back in his chair; his contented smile welcomed my questions about The Clay Harris Theatre and their upcoming season of activities and performances. Not only did his last play have a completely sold out show, but his theatre is blazing forward toward new projects and milestones.

ML:  What does the line-up look like for the Clay Harris Theatre in the approaching months? CH:  This year we have six plays. We’ve already opened up with our season opener which was titled Georgia Mud. Great piece of work. For the next five plays, two of them are revivals of plays we’ve already done, the other three plays [are completely new].

ML:  Tell me a bit about the next play “Gate 4.” CH:  “Gate 4,” which is the next play, October 11th and 12th, that one takes place at a Greyhound-type bus station. Full of characters. It’s almost like a “Capra” movie. Almost a “James Thurber” zany comedy.

ML:  And what about the other plays? CH:  In December, we’re presenting “Scrooge.”  My version of a Christmas Carol. Absolutely stunning piece of work, based on my insanity.  Then we’re reviving our Valentine play, “I’m Yours.”  It’s an all male version of what their concept of love is. It was a delightful hit so we decided it was time to bring it back.

ML:  Then the rest of the season are all-original plays? CH:  One is “Family Reunion.” I haven’t decided if that’s gonna be a comedy-drama or a drama or just a comedy. Then the other one is called “Reasonable Facsimile,” and that’s a comedy-drama also.  So I’m very excited about this new season coming up.

ML:  You’re about to hit a milestone both personally and for the theatre itself. CH:  By the end of the season we’ll have thirty-two original plays from the Clay Harris Theatre here in Centerville, Tennessee.

ML:  The Clay Harris Theatre is branching out into other avenues than stage plays. What is that all about? CH:  We’re [The Clay Harris Theatre is] produced in association with the Hickman County Public Library, so this is part of the Library’s goal also–we thought it would be very important to have poetry nights. We do it once a month.  Not only do we discuss a particular poet that particular night, we also give opportunity for up and coming local poets to express themselves through their own poetry. We’ve gotten it off the ground; with promotion we will be able to get a larger viewing audience.

ML:  And there is another activity you are heading up. CH:  The other one [activity] is the short film series.  We’ve found the summer is a hard time to capture people’s attention and time. But there again, we’re excited about it, because this is gonna be great opportunity for local filmmakers to not only show their work but to bond with each other.  You never know what great things can come out of all this.  I’m especially proud that it’s catering to young, creative people.  [These] people need opportunity, and I have taken it upon myself–being at this age–that I’m gonna provide that opportunity for them.  That’s part of my responsibility at this point in my career.  Not only to partake in my own opportunities that arise but to give opportunity to other people.

ML: There is a running theme of “giving” behind The Clay Harris Theatre. CH: Most definitely. It is better to give than to receive. [Chuckles] I don’t know where I heard that.  That’s when life becomes rich!  You’re never rich if you’re a taker. And I want to be rich, so I give.

To find out more about The Clay Harris Theatre, how you can help and how you can attend an event, please call the Hickman County Public Library at 931-729-5130.  You might even be greeted by Clay himself!

ML:  What is some of the creative process behind your plays? CH:  We do what a lot of theatres don’t do…they start with a play and stage it. We start with people…and all of a sudden, at the end of the run, we have a play.

Manuel Lagos, Jr. is an aspiring writer and filmmaker from Middle Tennessee. When he is not working on college homework he is concocting videos for his YouTube channel “Brain-pan Media” or working as a hired videographer. Some of his passions include reading, drawing, and re-watching The Lord of the Rings Trilogy.