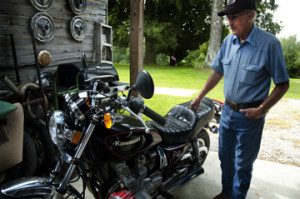 Ed Dangler in his garage near Mount Pleasant.

matter of factly and smiled. A passion for old bikes fills his garage and barns.  But his passion for motion and family are in the heart and soul of Ed Dangler. Kyle, his 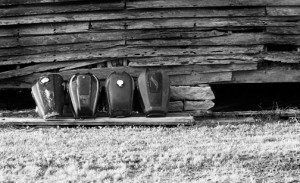 grandson, was the motivator as well as the gas crunch of the 70s, to switch from drag racing on the streets to racing motorcycles. Kyle follows closely in his granddads path, running the three biggest amateur races in the U. S. for his employer, FMF on his KTM bike. “I’ve had an exciting life, a fast life,” Ed commented. Throw in the fact that he has flown planes, raced bikes and cars, and still has his champion blood line Arabian stallion, Ed’s life as a toolmaker may seem a bit tame. But even at work, he had a brush with grandeur. “In 1969, my boss had an offer to 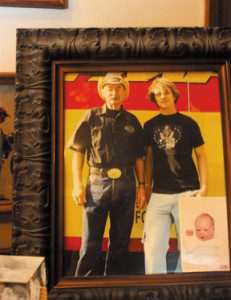 make a piece of the rocket that went to the moon,” he said.  “I told him I could do that.”  With an order to drill 42 holes in two pieces each, only .04 of an inch in diameter and the two pieces had to fit and match, his boss was skeptical.  “But I did it,” he said with a laugh. Married at age 18 to his late wife, Patricia, “Nothing I could have done with out her.  She was my backbone.  She helped me milk the cows, with drag racing, with everything.”  At the 1965, track during intermission, Patricia entered a Powder Puff drag race, finishing within two tenths of what Ed ran.  “She was a heck of a driver.” That was her first time on the track but she had raced many times in the street. 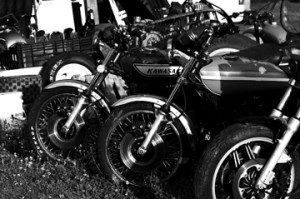 “When Kyle raced, if I was unable to go, she would load the bike and take him,” Ed told.  “You would never know she had Polio.  She never let it slow her down.” Ed Dangler is still in perpetual motion just maybe not as fast since Patricia passed away December 18, 2005.  But Kyle is still traveling at breakneck speed.  And Ed is not too far behind.