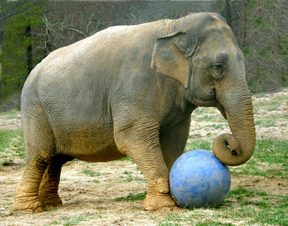 Billie playing with a ball. Photo courtesy The Elephant Sanctuary

Twenty years she was part of the circus.  As part of the Hawthorn Five from 1973-1993, Billie, Bombay, Tess, Delhi and Joyce performed mostly with Shrine Circuses.  Aggression was building and by 1993, after lashing out at trainers, the U. S. Department of Agriculture declared Billie dangerous and ordered her out of show business.

In 2006, after 13 years in a 20’ x 20’ stall with the Hawthorne Corporation, Billie was confiscated by the USDA.  As part of the prosecution for violations of the Animal Welfare Act involving inadequate care and mistreatment of its elephants, Billie and seven others were sent to The Elephant Sanctuary near Hohenwald, Tennessee.

Billie was captured in India in 1966 at age four and brought to the Southwick Zoo in Mendon, Massachusetts.  She was sold into the circus industry in 1972.

Natural needs of elephants including play and social interaction available at the Sanctuary added a new dimension to life for the Hawthorne “girls.”

From the time an elephant is born in the wild, it is embraced by the social network of the herd.  Maternal bonds are established and multi-generational relationships are formed for life.  Trauma induced, when that social aspect is broken by capture, adds unnatural stress.  The removal from the family setting disrupts healthy social interaction which can do as much for the overall well-being and longevity of an elephant in captivity as a high quality diet and veterinary care.

When Billie became the 21st resident at The Elephant Sanctuary that February in 2006, a visible reminder of her days in forced servitude remained:  A chain around her front left leg she would allow no one to remove.

Five years later, in 2011, Billie’s  trust level increased to the point that her primary caregiver, Richard, believed he could begin the process to remove the chain. 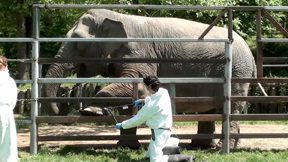 “Removing the chain was something we had all wanted to do for a long time but were never able to.  Until the positive reinforcement training, we never had a way of telling Billie what we were trying to do, so she seemed to assume when someone’s getting close to her, it’s probably bad.  Convincing her otherwise was a group effort.”

Using Protected Contact, a form of positive reinforcement, Sanctuary caregivers “asked” Billie to present the foot for treats.  “This quickly became Billie’s favorite thing to do,” Richard explained (Trunklines, Summer 2011).  For three weeks, the caregivers gradually introduced the bolt cutters, getting them close to her foot.  Finally, the day arrived.

“The first cut was easy and it showed us the chain was weathered and weak. I looked at the chain for a few moments, knowing each passing second was valuable. Even though we did our best to keep her calm, we knew that because Billie is so sensitive, her patience could not be pushed too far. After the sixth cut, there was no more that I could take off using the bolt cutters, so I set them aside. I reached out to her foot with my hand to see if I could separate the links; I was just going to test it, but a slight touch caused it to slip right off. The chain rattled to the ground and we were finished. After the chain fell, Billie picked it up for a moment out of curiosity, but quickly lost interest and left it behind for good.”

Information in Billie’s file indicated she would turn 60 this year.  But recently discovered information revealed her true age of 51.  In celebration of elephants with milestone birthdays, Billie’s birthday will be honored in October during the Hohenwald Lewis County Chamber of Commerce’s Oktober Heritage Festival, October 11-12, 2013.

Can I See The Elephants?

Access to The Elephant Sanctuary is not permitted.  True sanctuary is protected for “The Girls” out of respect for the decades many spent in chains, or performing in circuses or zoos.  On 2,700 acres in rural Lewis County near Hohenwald, 14 elephants spend their days grazing, playing in the water and 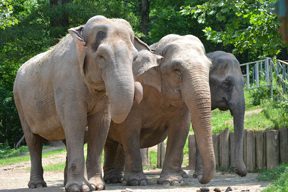 learning how to be an elephant in a herd.

The complexities of an elephant herd are many.  Elephants exhibit a broad range of behaviors scientists associate with intelligence, including moods, complex cognitive skills, boredom, use of tools, play, deception and self-awareness.  Free to make choices on every aspect of life including what foods they eat, where they sleep and which other elephants they “hang” with, means elephants are thriving at The Elephant Sanctuary.

How Can I Help?

Help the elephants when you make a donation.  Learn more at www.elephants.com.

The Elephant Sanctuary (TES) in Tennessee is a 501(c)(3) non-profit corporation licensed by the United States Department of Agriculture and the Tennessee Wildlife Resources Agency.  Founded in 1995, TES is the nation’s largest natural habitat refuge developed specifically for endangered African and Asian elephants.