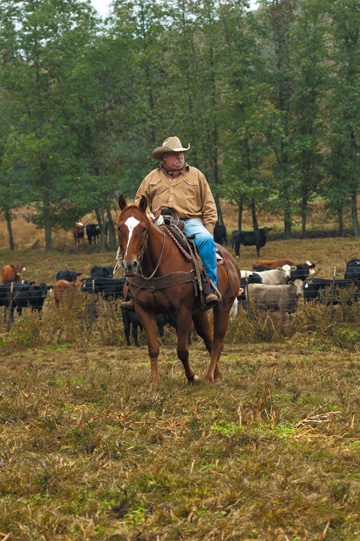 Kindergarten class at the Ellison Ranch in Lewis County currently is comprised of about 400 enrollees.  This schoolroom environment is always conducted outdoors and the students are only required to learn to eat and drink.  No math or science, and the only word spoken is “MOO.”

Kenny Ellison is the headmaster.  From atop Josie, his 18 year old, registered quarter horse, Kenny explains, “We just get ‘em through the sweats.”  Cattle producers send calves to Ellison Ranch for a preconditioning process where they learn to eat formulated feed and hay, but more importantly, the young bovines receive vaccinations, antibiotics (when needed), vitamins and minerals and plenty of fresh water.

Recess lasts 24 hours a day on a 250 acre playground.  In 50 days, the calves double in weight and are ready to return to the ranchers.  Some of the bovines end up at the feed yard in Lynchburg, Tennessee where part of their daily rations include “whiskey slop” from the Jack Daniels Distillery.

The first time this author saw Kenny Ellison was during the Fraternal Order of Police Rodeo in Hohewald in 2006.  Kenny and his Dun gelding, Rosey, were the pickup team for the bucking bronc classes.  Kenny has been picking cowboys from broncs since he was a teenager.

“Rosey got HIS name because of his rosey disposition,”  Kenny said 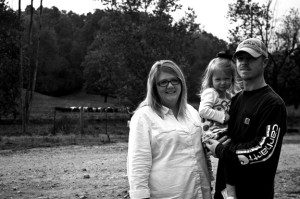 Kerrie Ellison Anthony and her family help her dad on the farm. Photo Becky J. Newbold

sarcastically.  “My daughter, Kerri, and I are the only two that could ride him.  He was big and when those bucking horses pushed against him, he would push back.  He’s dead now, but was a great horse,” Kenny reflected.

“I wouldn’t even know how to start a 4 wheeler,” Kenny chuckled when asked about only using horses.  “Josie’s been a good one.  The original owner tried to use her as a trail horse.  Josie was too ornery.  Not too long after I got her,  we were over in the creek, and she decided to stop going up the other side.  Josie stood for a minute and then we had a ‘come apart.’  When it was all over, I don’t know which one of us was more out of breath, but we never had a another problem.  Anybody can ride her now, even Briley, my three year old granddaughter.”

Everything about Kenny is cowboy.  He is currently attending the 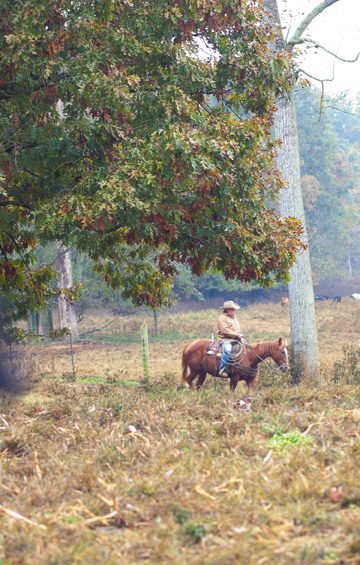 “Cowboy Church” in Ethridge, Tennessee. The Ellison clan are all involved in the cattle operation.  Kerri is bookkeeper, truck driver, vet and anything else that needs doing.  Kenny’s grandsons, Bentley and Preston, have become invaluable cowhands at the ranch, able to perform most tasks.  Bo Anthony, Kenny’s son-in-law, works  part time but is on call full time as an Ellison Ranch hand.  Patsy, Kenny’s wife, has been working sale barns in Florence, Alabama and Savannah, Tennessee since she was 15.  Kenny’s cowboy roots go back to stepfather, Glenn Robinson.  “He could do more with a dog, a horse and a cow than anybody I ever saw in my life.  We used to catch wild cattle for people in West Point, Mississippi,”  Kenny remarked. 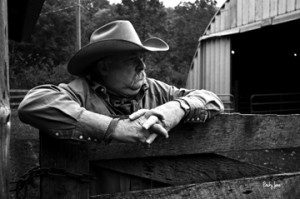 We observed the cowboy and his horse effortlessly cutting “kindergartners” from the herd who were in need of extra attention.  As Kenny aptly asserted, “My job is to make this a ‘good doing herd’ in 50 days.”