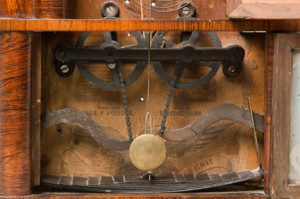 From the time he was in grade school, Roy Fuston had a knack for making things tick.  Fellow students would bring clocks and watches, and teachers allowed the young man to make repairs to the spring-driven time pieces during study hall.

Born in 1928 in Warren County, when Roy Fuston graduated from high school, he opened his own clock repair business in Woodbury, married the woman who would become his wife for 57 years and later expanded his shop to include jewelry. 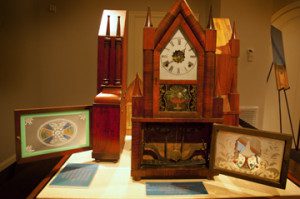 At the time of his death in 2005, Fuston’s collection of clocks numbered 600.  His son, Steve Fuston, and wife, Kathy, now care for the treasure.  He began collecting with the purchase of a grandfather clock at an estate sale in the 1960s.  When the collection outgrew his home, he opened Fuston’s Antiques in Smithville.

From October through March 2014, approximately 70 clocks from the Fuston collection will be on display at the Polk Presidential Hall in downtown Columbia.  Ranging in age from 1795 to 1850, “most of the clocks are from the Polk life span period.  There are a few outside that time period,” curator Tom Price commented.

Two clocks on display are from other collections:  One owned by Ken Penkal of Columbia and the other by Carl Quakenbush of Murfreesboro, members of the Dixie Chapter of the National Association of Watch and Clock Collectors.

“We have clocks my late father-in-law collected, Kathie Fuston began.  “He loved clocks.  When they were in his home he was unable to share them.  It’s wonderful to share them with something we support.”

One large hanging clock was made by a clockmaker named Pollhans for his bride.  “Since 1840, we are the third family to own the clock,” Kathie commented. 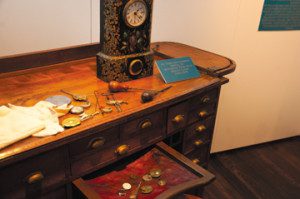 Roy’s workbench is part of the display at the Polk Hall.  “I can remember him working there,” she added.  He became a licensed watchmaker in 1956 and was a lifetime member of the National Association of Watch and Clock Collectors.

Showcased in the exhibition are a wide variety of superbly crafted timepieces including tall case, mantel, banjo, steeple and beehive clocks. 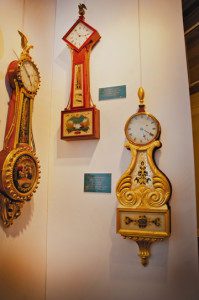 Although affluent Americans in the early 1800’s treasured ornate gilded dome clocks from France, manufacturers in the United States produced first-rate clocks that were more affordable for the general public and are now prized by collectors.

“What’s great about clocks to me is clock making was revving up as the industrial revolution was too,” Price noted.  Clock makers were innovators, always looking for an improvement on the latest design.

“Keeping Time” features both imported and American clocks by noted New England clockmakers Eli Terry, Seth Thomas and Chauncey Jerome.  With it’s characteristic fly on the dial, reproduction 19th-century clocks by the infamous Elmer Stennes who crafted many of his pieces while in prison for murdering his wife, are also part of the exhibit.

Functional and beautiful, the evolution of time-keeping from wooden geared to brass geared clocks fascinates as the clock makers designed each piece to sequence with precision keeping hours, minutes, seconds, days and moon phases. 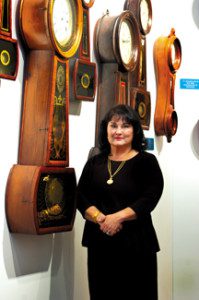 “Each one is really a piece of art,” Price remarked.

In the Dekalb County cemetery, a replica of his favorite clock marks the final resting place of  Mr. Roy Fuston.

Polk Presidential Hall is located on the grounds of the James K. Polk Home and Museum at 301 W. Seventh Street in downtown Columbia.  To make plans to see the exhibit call 931-388-2354 or visit the website www.jameskpolk.com.