When a man with a big heart and generous spirit comes on hard times, he can truly discover how many friends he may have.

By appearances Kerry Gilbert has nearly the entire state of Alabama at his back.

“He is an ordinary guy with an amazing amount of talent,” Susann Hamlin, executive director of the Colbert County Tourism and Convention Bureau told.  “Kerry Gilbert is a gentleman and a gentle man,” she added.  “Selfless with his time.”

“He is a rock in the community,” friend and fellow musician Dan Terry of the band, Rewind, explained.  “I have known Kerry since his high school days with the Mountain Breeze band.  He is a good, all around Christian guy and does not waiver from his beliefs.  What you see is what you get.”

A native of Russellville in northern Alabama, Kerry grew up “surrounded by love, music and a desire to positively impact his community through the magic of music,” shared Jon Hamilton, a cousin and promotions manager. 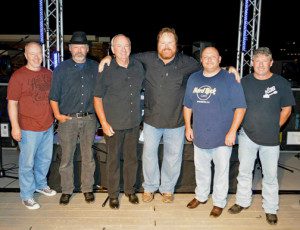 Influenced by the nearby Muscle Shoals music scene, Kerry formed the KGB (Kerry Gilbert Band) in 1992.  Powerful Swamper-inspired ballads and tight harmonies find their way on stages across northern Alabama from benefits to festivals, even to nursing homes.

“Kerry provides wonderful music all over the Muscle Shoals area,” Hamlin commented.  “My mom was in a nursing home where he regularly plays and leads sing-a-longs.  They remember songs but do not get a chance to sing.  Kerry takes requests and allows them to sing with him.”

“Sometimes he will bring his guitar to a restaurant when we have international visitors in town.  He shows up and gives them a taste of Muscle Shoals music.  He’s there to do what he needs to do to have fun.  Kerry means a lot to the community,” Hamlin remarked.  “He’s a first class human being.”

Kerry found himself on the receiving end from the community he loves so much when diagnosed with cancer last year.

“He played the Watermelon Festival here in Russellville just a few days before he found out,” explained Cassie Medley, executive director of Alabama’s Franklin County Chamber of Commerce.

“You didn’t know he didn’t feel well.  That takes a lot.  He got on stage and I did not really know there was a difference,” she continued.  “He was in the hospital a few days later.”

“Kerry is an encourager, even on stage,” Medley continued.  “He talks to the audience and draws you in.  His positive outlook and personality are infectious.”

Kerry hosts a music show the second Saturday of every month at the Roxy Theater in Russellville, Alabama.  Special guests appear at every show including the Secret Sisters and young Jackson Nance who have appeared with Kerry at the Roxy, a landmark of the Americana Music Triangle.

“It’s been a real shot in the arm to our community,” Franklin County Arts & Humanities Council member Wanda Myrick explained.  The council owns the Roxy Theatre and has been host to two fund raising events to assist with Kerry’s medical expenses.  “When we started reaching out to help Kerry, everybody wanted to help.  Everybody loves Kerry Gilbert,” Myrick continued. 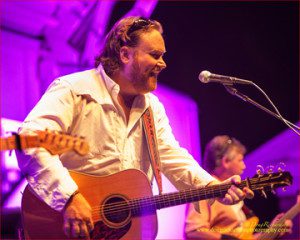 “At first it was not a good diagnosis,” Terry told.  “It was later determined to be a treatable type of cancer.  He has lost his hair but he’s still playing.  We text or talk after his treatments and he is always on the positive side,” Terry added.  “He will text, ‘I think I’m gonna be ok.’  He never complains.”

At a fund raising concert at the Roxy, Terry invited Kerry to join them on stage.  Kerry Gilbert’s rich bass notes rang in the final song of the evening, “How Great Thou Art.” 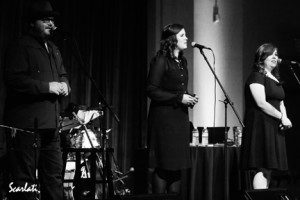 There have been fund raisers throughout the state, Medley said.  “People just want to do something to show their appreciation of his career of music.  He’s got a lot of support and a lot of folks praying for him,” Medley shared.  “That’s something you can’t put a price on.”

More information can be found at www.kerrygilbertband.com.