Mid-winter is the time of year when seasonal wetlands, also known as vernal pools, begin to fill with rainwater.  It is the time when the magic of life begins in these temporary ponds that are often overlooked as important breeding places depended upon by the most secretive of our native amphibians.  Because they are slight depressions in the landscape, these pools will hold water when the soil becomes saturated from winter rains.  During this time of year, when trees are dormant and not absorbing water, when temperatures are cold and evaporation slows down, rainwater slowly begins to collect in low places.

For several years, I have been studying a vernal pool called Green Pond, located in southeastern Lewis County on land owned by Swan Conservation Trust.  It has apparently been a well-known natural landmark for many years, as the US Geological Survey names it on the Summertown topographic map created in 1951.  It is also listed on the National Wetlands Inventory.  Amazingly, it has survived as a seasonal wetland to this day, unlike many others that met their fate by being filled for a parking lot or a housing development.  Because vernal pools are dry for much of the year, they may not be recognized for their critical ecological functions.  Thus, they are disappearing at a rapid rate. 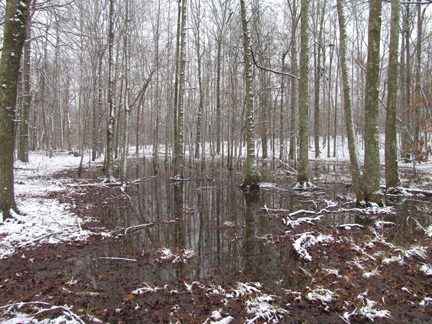 Green Pond was somewhat protected for many years in the hands of an industrial forestry company that recognized it as a wetland and left the large pin oaks and sweet gums to grow in the middle of the pond.  Although these trees normally grow in moist soils near water, their buttressed roots do not have a long-lasting tolerance for being covered with water, as do roots of the Bald Cypress.  Eventually, the trees of Green Pond reached the end of their lives as wetland residents, so the forest floor there is littered with dead limbs, logs and a thick layer of leaves.

When Green Pond came up for sale, Swan Conservation Trust took the opportunity to purchase it, adding to the land now known as Big Swan Headwaters Preserve.  There is no longer any danger that this ephemeral wetland will be logged or filled for some unsuitable purpose.  It will continue as a lovely place to visit, a living laboratory for research, and a critical habitat for the creatures that began using it long before man discovered its existence.

As a means of finding out which species of amphibians and reptiles live in the Green Pond area, we set out square, wooden, cover boards and old pieces of tin, both of which function as hiding places similar to fallen logs, limbs or thick layers of leaf litter.  We then monitor these samplers throughout the year.  Learning and listening to frog calls in the spring and summer is another activity that is much easier than trying to catch and identify the frogs.  We have heard Gray Treefrogs, Green Frogs, Upland Chorus Frogs and Spring Peepers at Green Pond.  To hear various calls of frogs found in Tennessee, go to the web page developed by the Tennessee Wildlife Resources Agency at www.tnwatchablewildlife.org.

Often, we find nothing under our samplers, especially during months when the weather is hot and the pool is very dry.  But we discovered that two species in the family Mole Salamanders (Ambystomatidae) are using Green Pond during their autumn and winter breeding seasons, when they are most active and congregate with others of their species.  During the dry time of the year, they are solitary and inhabit upland deciduous forests, never far from the vernal pool where they were born.  Both species are somewhat dormant then, resting under logs or in underground tunnels of other animals (hence the family name of Mole Salamanders), coming out only if no potential food items wander into their burrows.  They eat earthworms, slugs, snails, insects and other small invertebrates. 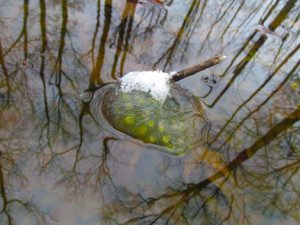 We first became aware that one species, the Spotted Salamander (Ambystoma maculatum), was in the area when we discovered hundreds of clumps of fertilized, jelly-covered eggs attached to sedges emerging at the pond surface in late winter and early spring.  Each gelatinous mass protects 100-300 developing embryos from desiccation and cold temperatures, even if the pond dries up prematurely or freezes over.  The eggs take 28 to 49 days to hatch, depending on the temperature of the water.  Larvae have gills, are about one half inch long and live in the leaf litter on the bottom of the vernal pool.

Adult Spotted Salamanders also turned up under our cover boards during the winter months.  They do not skitter away as other salamanders might, but instead remain still and inactive while being observed.  Being one of our area’s largest salamander species, the Spotted Salamander female can grow to ten inches and the male to six inches.  The male and female look the same, having dark grey, brown or black bodies with two rows of round yellow or orange spots from the head to the tail.  Glands on their backs and sides produce a mildly toxic, nasty-tasting liquid if a predator threatens one. 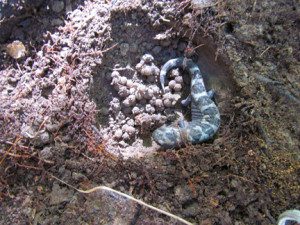 A female Marbled Salamander “guarding her eggs,” discovered under a cover board in October 2013 – photo by Cynthia Rohrbach

Spotted Salamander breeding behavior begins with the winter rains.  They migrate in large numbers on rainy nights, often crossing roads to get to the pond where they were hatched.  They return to the same pond year after year to breed and will by-pass closer ponds to find their home pond.  The migration trip is dangerous, especially when it entails road-crossings.  Several studies have documented mortality of hundreds of amphibians on certain sections of roadway. The National Park Service has installed flashing signs on sections of the Natchez Trace Parkway in Mississippi where Spotted Salamanders are known to cross, alerting drivers to reduce speed to 35 mph to avoid running over these creatures on rainy nights from November through March.  The National Park Service also offers lesson plans for K-12 teachers on the Natchez Trace Parkway web site to encourage education and awareness of Spotted Salamanders.

In October 2013, we discovered a second species – Marbled Salamanders (Ambystoma opacum) – hiding under our cover boards and tins at Green Pond. This species of salamander is smaller than the Spotted, growing from 3.5 – 5 inches long.  They have chunky bodies and are black or dark brown.  Males have bold, silvery-white cross-bands on the head, back and tail, while the female’s markings are gray.  Both males and females have poison glands in their tails.

This nocturnal, secretive, seldom-seen creature is the only salamander known to breed on land in autumn, when males and females congregate in low places in the forest, engaging in courtship and mating.  The female lays about 50-100 eggs in a nest consisting of a dug out space under fallen logs, layers of leaf litter or other protected spots within or near a dry seasonal pool.  Thus, we found several under our cover boards in shallow dug out depressions.  The female curls her body around or over the eggs to keep them moist, giving the impression of “guarding” the eggs until the fall rains saturate the soil and the pool fills.  If sufficient rains do not occur during fall or early winter, the eggs may not hatch until rains cover them in the spring.  The eggs hatch out within a week or two of being flooded, and the salamanders spend a 4-6 month aquatic, larval stage in the pool.  During this period, they eat zooplankton, the nearly microscopic animals swimming in the pond.

Variations from our typical winter weather can create less than favorable conditions for both species.  The extreme cold this winter may have killed the Marbled Salamander eggs under the cover boards at Green Pond.  We noted that the females abandoned their eggs in December, perhaps returning underground to their burrows for more protection from the cold.  Usually by the time of this writing, the end of January, the pool at Green Pond has formed.  However, precipitation so far this winter has not been enough to flood the area, so the eggs remain isolated under the boards.

Climate change is having several, potential, detrimental effects on salamander breeding success.  One effect is altered timing of winter rains, which can disrupt the normal life cycles.  A second effect is the timing of leaf-on of deciduous trees in and around the pools.  When the leaves appear, trees come out of dormancy and begin absorbing groundwater again through their roots.  This causes the pools to dry up, and if it occurs too early, the normal life cycle of the aquatic larvae will be disrupted.  In March 2012, we had unusually warm temperatures, causing abnormally early leaf-on of the trees, coupled with little precipitation.  Thus, the early drying of Green Pond, which normally holds water until June, undoubtedly halted development of the aquatic salamander larvae prematurely, resulting in death.

As you can see, with so many obstacles to overcome, there are very few salamanders of either species that will make it to adulthood.  Some years may produce few to no successful outcomes.  States, such as Massachusetts and Michigan, have listed Marbled Salamanders as “threatened” due to habitat loss from residential and commercial development, habitat degradation from such human activities as timber harvesting and habitat fragmentation most notably from roads.  The deciduous forests surrounding the temporary pools are important to conserve because they provide terrestrial salamander habitats for many months outside of the breeding season.  In Tennessee, fortunately, the Spotted and Marbled Salamanders have not needed special status and are still regarded as “common.” 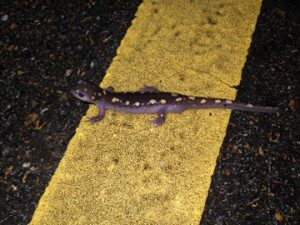 You can help the Spotted and Marbled Salamanders by being aware of the journey they make to their birthplace on rainy fall and winter nights, which may entail crossing a country road in your area.  I have encountered them myself, stopped the car and moved them across the road in the direction they are heading – just a small action to help these defenseless creatures toward a successful breeding season.

Identifying temporary pools on your land or in your region during the wet, winter months may also help save these special places for the long-term.  Check them out to see if clumps of the gelatinous Spotted Salamander eggs are floating on the surface.  Swan Conservation Trust kept a watchful eye on Green Pond for many years before the opportunity to purchase it became a reality.  Now it will be preserved forever as a wild place for creatures known and yet undiscovered.

Cynthia Rohrbach is a biologist with a 20-year career as a science teacher followed by a 12-year position as an environmental specialist with Tennessee Department of Environment and Conservation.  She is a founding board member and former President of Swan Conservation Trust, www.swantrust.org.