You are a pixel man, and your name is Steve. You wake up in an unfamiliar world, an intricate habitat with hills and trees made out of blocks.  You walk around and see animals—sheep, cows, pigs, rabbits.  You explore and come upon water, beaches and maybe a cave.  After a while, it starts to get dark.  You hear growling and turn around to find a zombie overtaking you.  You punch it with your pixelated fist and manage to kill it before it kills you.  That’s when you know you’re in trouble.  You have to find shelter, so you camp with your back to a hill and wait out the darkness.  When morning comes, you know you need to find weapons to protect yourself.

Punching a tree gives you wood, and with wood you can make planks and sticks.  Creating a crafting table allows you to to make wooden pickaxes and swords.  You can mine deep into the ground to find stone and iron to make better weapons.  You make shears and get wool from a sheep, which allows you to make a wooden bed with a blanket.  You must kill animals to eat.  You must sleep at night to avoid monsters.

You become a monster-fighting expert, slaying zombies, skeletons, huge spiders and creepers with ease.  You build a proper house.  You start a farm and plant seeds in the ground to grow wheat, pumpkins and melons.  Eventually, you mine to bedrock, which is the lowest you can go in this world.  Down there, you find gold and diamonds.  The more resources you have, the more you can do.  The possibilities are endless.

Anyone who has ever played Minecraft in survival mode can relate with this story.  Minecraft is a game where infinite block worlds can be created.  Players can enter one world at a time in creative or survival mode.  In creative mode, you can’t die and have infinite resources to mold your surroundings.  In survival mode, you must find or create all resources yourself, and you are at risk of getting killed by monsters.

Every Minecraft world is different.  Some have a lot of sand, some dirt.  Some are icy, and some have volcanoes with lava.  Minecraft can be played on a PC or Mac computer, iOS, Android or Xbox. 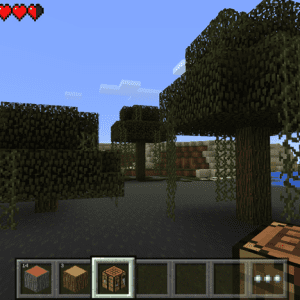 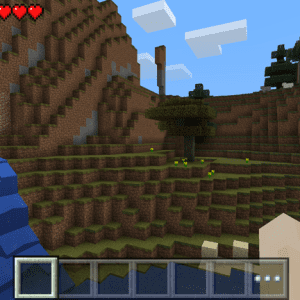 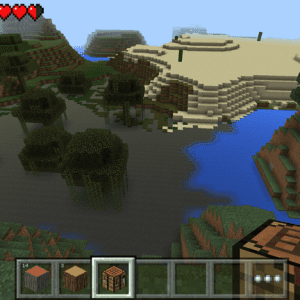 The game mainly involves placing and removing (mining) blocks. Other than creating and destroying things in the world, there isn’t a set goal to the game, which allows the player limitless creativity.  “Minecraft’s open world of 3-D blocks resembles a Lego world, with Lego being the paragon of the virtuous toy,” a New Yorker article stated, “…the foundational experience is wholesome—shredded wheat for the mind.”

Minecraft is tremendously popular with young children.  MineMum.com is a site dedicated to helping parents help their kids play Minecraft.  For younger kids, it is essential that the game be played with supervision and support.  Although the worlds in Minecraft are unrealistic, with square chunks of dirt, blocky trees and water that surges inexplicably from the side of a wall, Minecraft can be scary.  The first person perspective of the game encompasses the player fully into the environment.  You are a pixel man, and your name is Steve.  That growling noise is a zombie behind you.

According to MineMum, “Minecraft is not just another video game, where players sit passively staring at a screen as they run around trying to collect points or shoot bad guys.  It’s an immersive and interactive playground, where the constant challenges require the brain to work really hard during every moment of the game.”

While some parents may not want their children to play a computer game for long periods of time, as some children are prone to do, Minecraft can be educational.  It can teach kids creativity, as well as real world skills like patience, perseverance and cost-benefit analysis.

TeachHub.com discussed how Minecraft might be used like Legos in the classroom.  “If the teacher wants to use games to learn history, using Minecraft in the classroom won’t throw students into a fully fleshed simulation of the American Revolution.  It will start with a plot of land and students will write the story, cast the characters, create the entire 1776 world.”  Minecraft is a lot cheaper to play than Legos, plus, as one parent points out, “You’ll never step on a loose piece barefoot in the dark.”

Caitlin McLemore, a teacher in Nashville, described how she used Minecraft in an after-school program for 7th and 8th graders.  “The activity we found most successful was “World of Humanities,” a modification of MinecraftEdu created by a world history teacher for teachers,” she remarked.  “The world has different areas – the future, fairy tale forest, Sparta Island, Ancient Egypt, etc. that correlate to those times in history…This activity was most successful because there were several options – some students could build in the free build areas, some students could explore, while others worked on getting as many badges as possible.”

In September of 2014, after being owned by the company Mojang for years, Minecraft was bought by Microsoft.  The Microsoft chief executive Satya Nadella mentioned that Minecraft could help with STEM education.

Minecraft can give children an introduction to technology with a Minecraft feature called mods, or modifications.  Mods allow players to write code to change or add aspects of the game.  Mods are written in Java and they are used on the computer version of Minecraft.

Minecraft is a video game, and all video games can be abused by playing them too long or playing with players that have malicious intent.  Minecraft, however, has great potential for learning, since it is a flexible, creative game that is so popular already.  Some teachers are starting to use it in the classroom, and parents can use it at home as a family activity.  With a little supervision, Minecraft can be enjoyed by children of all ages.  I can vouch that it is fun for adults, too. Oh no, what’s that behind me? Ahh!